What is MoCC Ambassadorship?

Each MoCC Ambassador is required to pursue, under supervision, experiential learning that carries educational benefits for the Ambassador and are relevant to the MoCC’s operational and outreach activities.

Details of the requirements and financial support of the MoCC Ambassadorship are outlined in the programme flyer.  When the students graduate from the ambassadorship, each of them will be awarded a certificate of completion. The ambassadorship may be renewed for another academic year upon demonstration of excellent performance and the availability of funding.

Who may apply for the Ambassadorship?

Applications are open to all undergraduate and postgraduate students of CUHK.  Students in related fields (major or minor), such as sustainable development, earth system science, museum studies, geography, energy and environmental engineering, environmental science, anthropology or those who have a track record in participating in environmental services, may be given priority.

Interested students are requested to complete the online application form by 11:59 pm, 7 January 2021.

Shortlisted applicants will be invited to attend a selection interview to be held on 14 or 15 January 2021.

What are the expectations?

The MoCC Ambassadors are required to:

What are the important dates?

Each MoCC Ambassador is required to intern at the MoCC to pursue, under supervision, experiential learning that has educational benefits for the Ambassador and is relevant to the MoCC’s operational and outreach activities, after passing the assessment.

Details of the requirements and financial support of the MoCC Ambassadorship are outlined in the programme flyer.

Applications are open to all undergraduate and postgraduate students of CUHK. Proficiency in Cantonese may be advantageous due to the high demand for Cantonese-led activities.

Interested students should complete the online application form by 12 pm on 22 September 2022 (Thursday).

Shortlisted applicants will be invited to attend a selection interview to during the week of 26 September 2022.

Assessment: Dry Run of Tour and Practice Tour (each of 3 hours)
Late October (exact date to be confirmed)

The Expert Committee is set up by the CUHK Jockey Club Museum of Climate Change Steering Committee to offer expert advice to the Museum on scientific matters, work areas and projects.

(Names are listed in alphabetical order)

Since its inception in early 2018, SDSN Hong Kong has led, supported and participated in a wide range of activities that address some of these challenges in sustainable development and support the implementation of the United Nations’ Sustainable Development Goals in Hong Kong and beyond.  The network intends to identify various means of collaboration with local and international experts in sustainable development, including researchers, social entrepreneurs, philanthropists, technological experts, government officials and key opinion leaders, in order to pursue sustainability solutions. 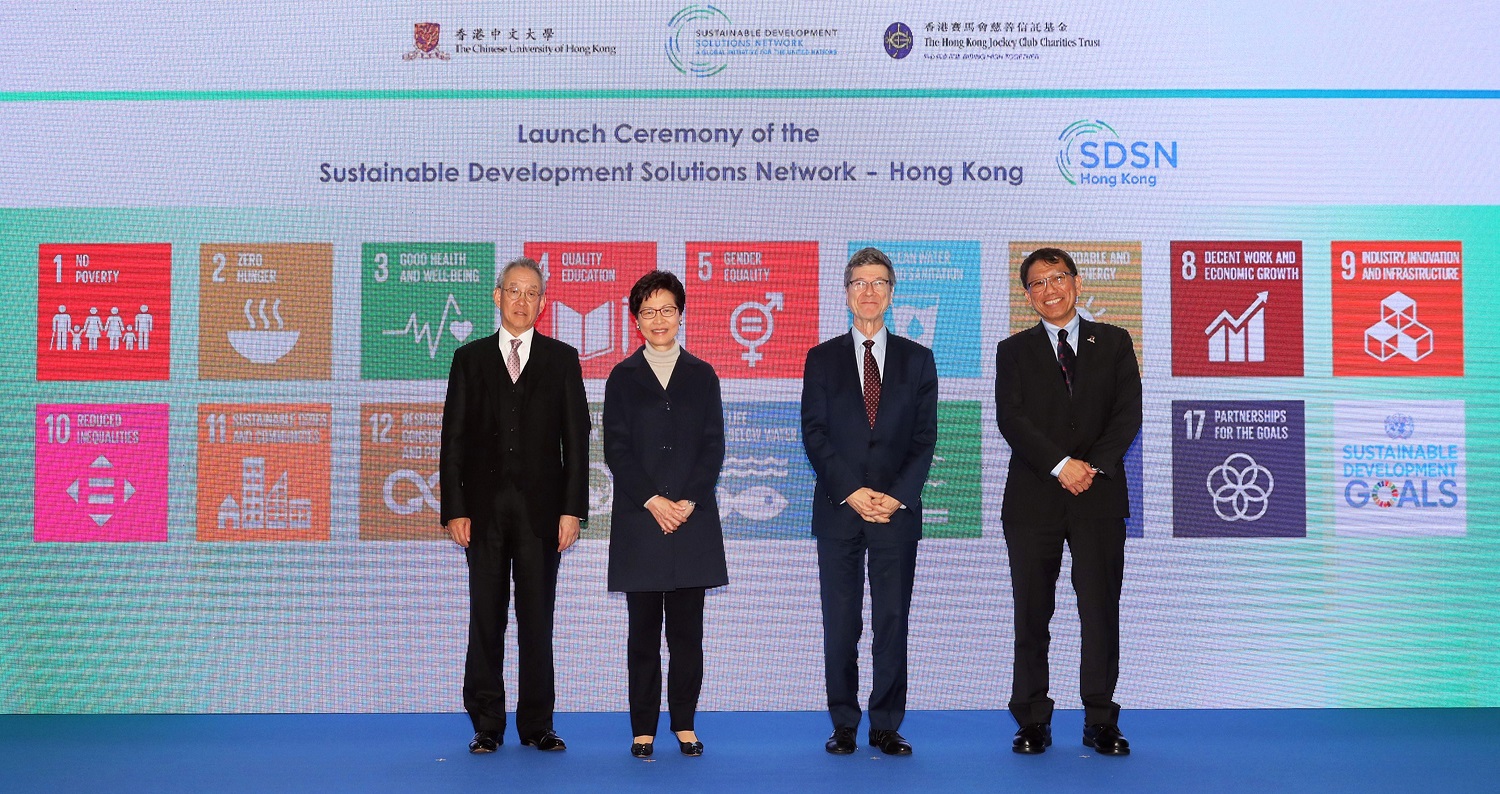 In December 2018, SDSN Youth Hong Kong was launched to raise awareness among young people in Hong Kong of the 17 Sustainable Development Goals, to allow them to exchange ideas with experts, and to encourage them to champion the cause of sustainable development by proposing innovative solutions to the many environmental challenges faced by Hong Kong.

Waste is the third largest source of greenhouse gas emissions in Hong Kong. The daily domestic waste generation rate per capita of Hong Kong is 1.36 kg, which is the highest compared to neighbouring cities at a similar level of development: 1.00 kg in Taipei City, 0.95 kg in Seoul City and 0.77 kg in Metro Tokyo (Environment Bureau, Hong Kong Blueprint for Sustainable Use of Resources 2013–2022). Waste – as well as waste reduction – is everyone’s responsibility.

The Waste Reduction Project is the first-ever school-based waste-charging simulation project, which aims to increase the school sector’s awareness of Hong Kong’s waste problem and educate school members on sustainable waste management (waste reduction, separation and recycling). We plan to invite 24 secondary schools to participate in the project, who will examine their waste generation, identify ways of achieving ‘zero waste’, take action to reduce waste and, most importantly, promote the action to the students’ households and the communities. Through the engagement infrastructure created by the project, the students – our future green leaders – will spread the message of ‘waste less, save more’ to households and communities, inspiring more positive action to respond to the impending introduction of a quantity-based municipal solid waste charging system.

Hong Kong Blueprint for Sustainable Use of Resources 2013–2022

In May 2013, the Environment Bureau of the HKSAR Government published Hong Kong Blueprint for Sustainable Use of Resources 2013–2022 (http://www.enb.gov.hk/en/files/WastePlan-E.pdf), which analyses the challenges and opportunities of waste management in Hong Kong, and maps out a comprehensive strategy, targets, policies and action plans up to the year 2022 for tackling the waste crisis.

According to the Zero Waste International Alliance, ‘Zero Waste is a goal that is ethical, economical, efficient and visionary, to guide people in changing their lifestyles and practices to emulate sustainable natural cycles, where all discarded materials are designed to become resources for others to use. Implementing Zero Waste will eliminate all discharges to land, water or air that are a threat to planetary, human, animal or plant health’ (http://zwia.org/standards/zw-definition/).

To achieve a better and sustainable future, the United Nations adopted the 17 Sustainable Development Goals (SDGs) in 2015.  Hunger and food waste are two major challenges, among others, we face today.  According to the Food and Agriculture Organization (FAO) of the United Nations, around 14 percent of food produced globally is lost after harvesting and before reaching the consumers, while approximately 17 percent of food is being wasted at the consumer level.  Even so, nearly 10 percent of the world population is still suffering from hunger.

In Hong Kong, one third of the municipal solid waste comes from food waste.  Turning the situation around requires a rethink of how we produce, consume, and share food, as well as what constitutes a sustainable lifestyle.  In response to the issue, the Jockey Club Museum of Climate Change (MoCC) of The Chinese University of Hong Kong (CUHK) organizes the ‘SDG Ambassadorship: Rethink Food’ programme, with an aim to engage participants in a comprehensive educational programme to explore the notion of food consumption, its related social and environmental issues in Hong Kong, and to develop creative solutions to the problems.

8 schools. Each participating school shall nominate a team of 4 students to join the programme.

Please check out the Chinese version

ECF Mobilizing Community Climate Action by Future Museum Curators is an 18-month (2021–2022) school-based community project supported by the Environment and Conservation Fund (ECF). The project capitalizes on the MoCC's experience in climate outreach and advocacy and represents a unique model of experiential and problem-based learning through curating an exhibition that inspires community pro-climate actions. Student participants (our 'Future Curators') will have the opportunity to showcase their works at the MoCC and will reach a larger audience worldwide through our various global partners.

The core component of this project is a comprehensive training programme designed to provide young people with the necessary knowledge and skills to communicate climate change and sustainable development through technology-aided exhibitions.

Various activities are designed to expand the reach and impact of the project, including:

Any opinions, findings, conclusions or recommendations expressed in this material/event do not necessarily reflect the views of the Government of the Hong Kong Special Administrative Region, the Environment and Conservation Fund and the Environmental Campaign Committee.

Join us to help your students...

Through a comprehensive training programme which includes sharing sessions, workshops and field trips, the programme participants (our 'Future Curators') will identify problems of climate change and explore the connections between climate change and the United Nations' (UN) Sustainable Development Goals (SDGs). The training will be provided in multiple modules covering climate change knowledge, basic curation skills and the application of AR technology.

Experience the work of a curator

The programme will expose the participants to various aspects of a curator's work, from content research, through description drafting, to exhibit design and development. Under the MoCC's guidance, the participants will work with their teammates to curate their own exhibitions to be staged at their schools and in a virtual gallery. Selected curating teams will co-curate with the museum team a year-end themed exhibition to be staged at the MoCC.

Showcase to the world

The participants will have the opportunity to showcase their works to a larger worldwide audience through our global partners. These include:

6 to 8 students from each school

The programme will consist of a series of interactive class and practical sessions.

Climate Action in the Community

A themed exhibition at the MoCC

To be held between October and December 2022

The Mobile Museum is a multimedia-enhanced and interactive exhibition series designed to educate users on climate change in an enjoyable and memorable way. The first collection in the series, ‘Polar Vision’, includes five exhibit modules which offer a personal virtual experience of climate change from a polar perspective.

The Exhibition Modules are available for loan, at no charge, by schools or organizations. Please submit a request by filling in the online registration form.

Mobile Museum: ‘Climate Change and Me’

The Mobile Museum is a multimedia-enhanced and interactive exhibition series designed to educate users on climate change in an enjoyable and memorable way. The second collection in the series, ‘Climate Change and Me’, consists of seven exhibit modules. They reveal how human activities and climate change are closely interlinked and promote important green concepts such as clean energy, a low-carbon lifestyle and sustainable development.

The Mobile Museum is a multimedia-enhanced and interactive exhibition series designed to educate users on climate change in an enjoyable and memorable way. The third collection in the series, ‘Climate Change: Past, Present, Future’, consists of eight exhibit modules which take us on a fascinating journey through time, revealing the importance of climate records and highlighting the current threat of extreme weather. The exhibit modules also explain what climate change means for us and how we can play our part in building a sustainable world.

Click here to take our brief visitor survey after visiting the Virtual Gallery. 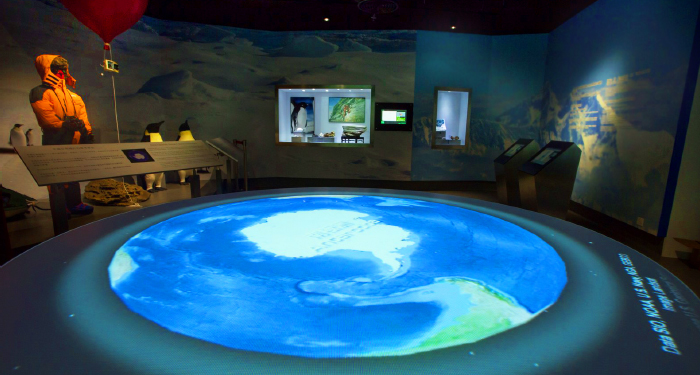 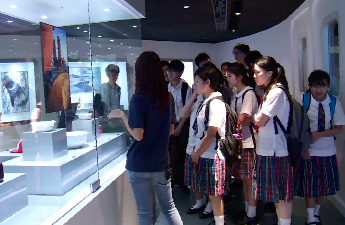 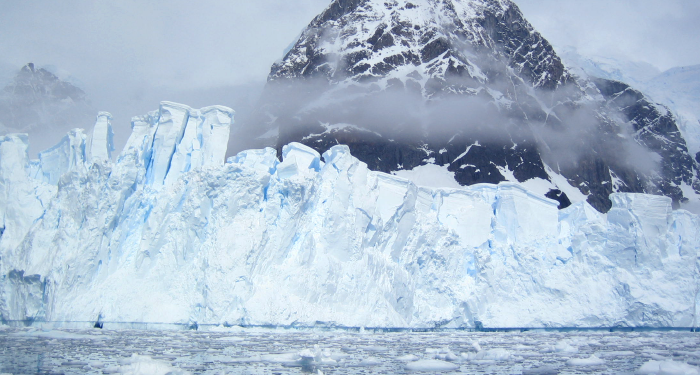